BHUTAN: A ROOF ON THE WORLD

AT THE VERY TOP OF THE EARTH IN BHUTAN, TIME IS RELATIVE. Your clock is six hours ahead of London, 30 minutes ahead of Calcutta, 15 minutes later than Katmandu. And it’s half the world and 500 years away from wherever you are right now. Imagine Britain during the Elizabethan era: men are wearing white ruffles at the neck, puffy knickers to the knee, dangling swords, hats with brims and feathers. Women wear plunging square necklines, jumbo jewels, leopard skins over silk, and kirtles. Today in Bhutan, men and women still wear what their ancestors wore when Queen Elizabeth began her Golden Age.

A Bhutani man wears the traditional gho, a one-piece gown with long sleeves folded back at the wrist, a kilt-length skirt held at the waist with a kera, a sash that forms a pouch above, for carrying a stash of incense or ngultrums. Traditionally, a knife was worn in the kera, but has now been replaced, perhaps sadly, by cellphones. The women wear a kira, a long sarong, topped with a tego, a long-sleeve jacket with lapels, all very colorful in stripes and plaids.

The Elizabethan Age was also Bhutan’s golden age. Before the early 17th century, the land of Bhutan existed as a number of small, fragmented fiefdoms doing what people always do: fight constantly with each other over land, women, yak cheese. The Tibetan lama and military leader, Shabdrung Ngawang Namgyal—say that three times real fast—unified the tribes and built a number of dzongs (fortress-temples, silent “d”) to help protect the land from the invading Tibetans. The dzong walls—at 8 feet thick (2.5 meters)—were impenetrable. They were built near rivers and had underground tunnels leading to the water, so they could sustain a long siege. The dzongs were built solely from the land: rock and dirt and wood. No nails were used (nails wouldn’t be invented for another couple hundred years). On the roofs, wood beams were notched to fit together, and bamboo poles, lashed. These supported slate or wood-beam shingles. Large rocks were placed on top of the wood shingles to help keep things in place. One might wonder about the efficacy of this, and I have no answers, but perhaps there are no strong winds in Bhutan, or they’re rare? Or, you make do with what the earth, or universe, gives you? 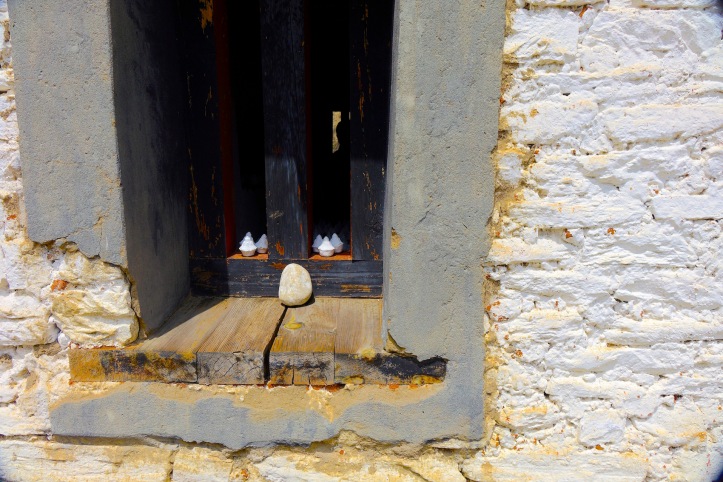 Structure of traditional masonry with massive wall and wood beams. Tiny, personal Buddhist stupas are placed in sacred places like this, along with prayers for peace in the world and happiness for everyone. Their prayers are never for personal gain.

Trashi Chhloe Dzong in Thimphu Valley at night. (not the best photo because it was hand-held at 1/30th sec). 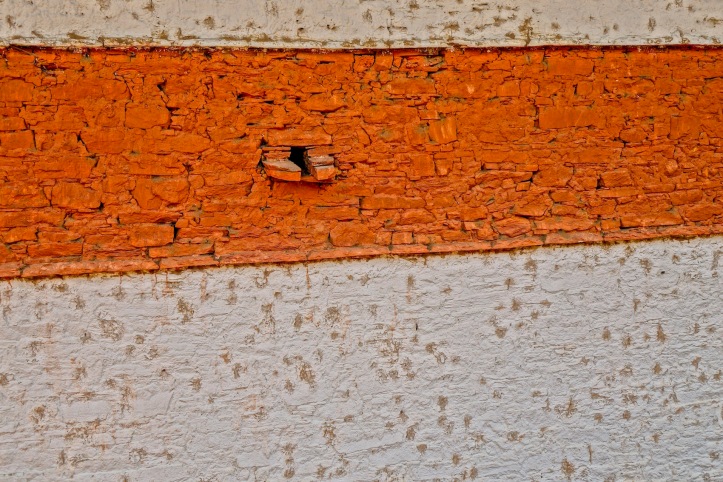 Stone wall with rain spout for drainage on a traditional home. 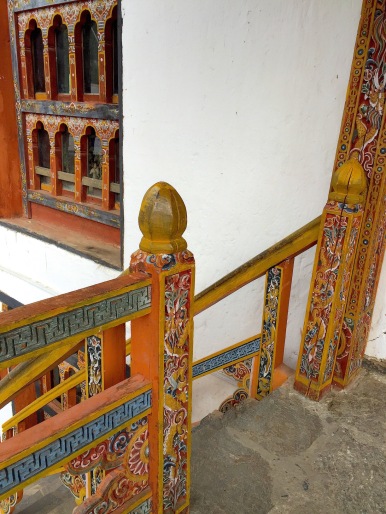 Bhutan is a land-locked country, borders no bodies of water, and is surrounded by mountains. Virtually all of Bhutan is mountainous with elevations running as high as 24,600 feet (7500 meters). Some broad valleys dip down to 300 feet. A number of powerful rivers originate in the Bhutan Himalayas and wash through the land; they are crystal clear and clean enough to drink. As a natural gateway into the mountains, the plains lying between the immense Brahmaputra River and running up to the foothills are known as duars, the Sanskrit word for “door or gate” and the origin of the English word door.

Cedar is the national tree of Bhutan. At every turn you’ll find forests brimming with them; if it’s raining, some may appear to look like a Monet painting.

The lay of the land in Bhutan: terraced mountains for agriculture.

A room with a view in a traditional house in the Paro Valley along the amazingly clear Shaba Lam River.

Water-propelled prayer wheel with slate roof, virtually in the middle of nowhere. The mud-colored bottom of the structure speaks of high water rushing through this valley in the past.

While traveling through this land, you might find yourself in the middle of nowhere many times—you might quite often want to stop and smell the roses, or famous blue poppies, as well as the blue pine and cedars that rise into clouds for miles, with no smog anywhere.

At this elevation, say 10,000 feet, many plants grow small and hug the earth, like these dainty, but hearty, forget-me-nots. 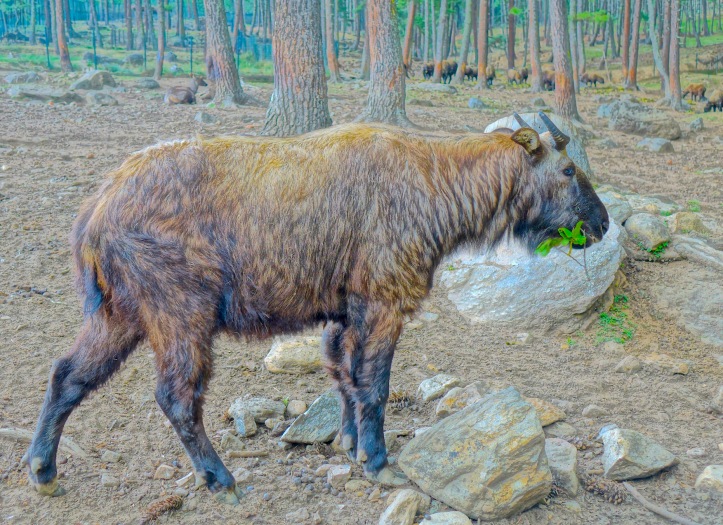 If you’re lucky and it doesn’t rain, you might happen upon a clearing in the forest and view a herd of very rare takin (rhymes with knockin’), Bhutan’s national animal, which some say resembles a cross between an ox and a goat. To me, it has the horns of a wildebeest, nose of a moose, tail of a bear, and the body of a bison. Some also say the takin inspired the legend of the golden fleece (caveat: don’t believe everything you read…this land is not only half the world away from you, it also lies half the world away from Greece, and there’s no mention of “Argonauts” in any Bhutani myths or history books–although they do mention “thunder dragons” flying in the air).

Sometimes when it rains at these elevations, it may easily turn to snow or hail, big hail.

Advice du jour: if you are going to hike in these mountains, wear sturdy shoes and make sure you are fit enough. And maybe hike with an umbrella. On visits to Bhutan, you’re required to be escorted by a guide and driver. Let your guide carry the umbrella up the mountain. And your daypack. He will beg to carry your bag for you, again and again—perhaps to facilitate your hiking, perhaps so you don’t look like one of those odious backpacker types. Or perhaps because he believes it’s part of his job: I saw one guide gleefully hustling down the trail carrying an obviously-defeated preteen girl on his back, her mother and father trailing woefully behind. And this: if your guide buys you a slug of dried yak cheese so that you can say you tried the local cuisine from this land…don’t.

NOTE: as you can see by the widget at the top of the page, I am once again about to depart on another journey, and once again having difficulty making a decision as to where to travel next. And the departure date is looming. I have once again waited too long for discounted airfares. My question today is this: do they make a pill to transform you into a Type-A person? Or at least a person who can decide which road to take out of Dodge? Or, maybe a pill to make you just not give a hoot what happens next?

If you’re considering a visit to Bhutan, I recommend booking with Bridge to Bhutan — a highly-respected, local and low-key tour company operated by two very interesting and highly intelligent brothers: Fin Norbu and Lotay Rinchen. They offer trips of three to 30 days, and will make you feel like an honored guest in their home. They can set your itinerary, or you can create your own, or change it while on the move.