THE TRUE ORIGIN OF PRAGUE’S ASTRONOMICAL CLOCK HAS BEEN SHROUDED for centuries. No one knew or remembered who had created the thing, and many myths about the clock abound. The most famous legend is that it was built in the first decade of the 1400’s by a master clockmaker named Hanus. The city councilors loved the clock so much that when they feared Hanus intended to build another clock for a nearby town, they had him blinded, so he couldn’t. Apparently, humans have always been so very human. You simply just don’t get to sit at the top of the food chain by being a pussy is the obvious lesson we keep handing down to the next generation.

We do know this, however: Prague’s clock is the world’s oldest astronomical clock still in operation (although it has been repaired a number of times). It is mounted on the Old Town Hall Clock Tower in Old Town Square. It’s hard not to admire the detailed workmanship, the ingenuity of its design and craftsmanship. And gold stuff. Not to mention the stone carvings on the building itself. 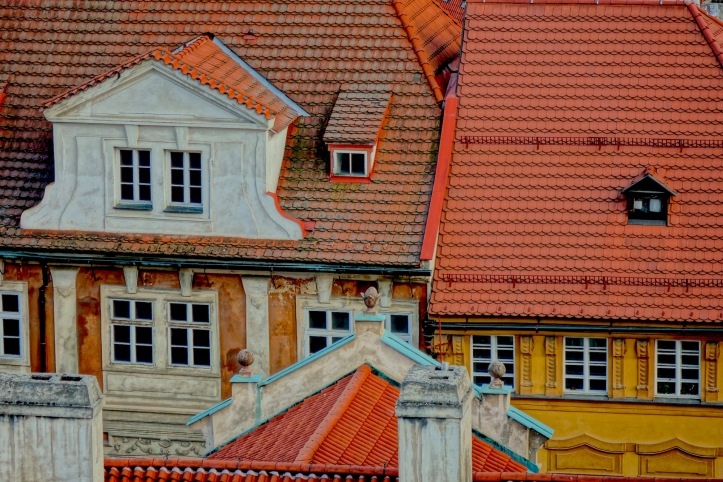 Apparently, Czechs have not traditionally been very creative with naming the areas of their city: New Town, Old Town, Lesser (smaller) Town. Rooftops of Lesser Town in Prague on the opposite side of the Vltava River from Old Town are almost as interesting to view as the clock. These homes are located on the hill just below Prague Castle, which is “the largest coherent castle complex in the world” and which now also houses…you guessed it…a new Starbucks there.

The John Lennon Wall is missing the painting of John Lennon that initiated the naming of the wall. Lennon’s image got painted over…who knows by whom? Or why? Or with what, maybe something like—“Ivan Loves Ivana” or “Come Together”? Still, it is still known as the John Lennon Wall, and the writing on the wall has expanded to about 50 yards long. The wall has become so popular, it is shown on tourist maps and travel guidebooks. Tour guides even take you there or point it out. One musician has been making a pretty good living by singing Beatles songs in front of the wall every day. The pub at the corner changed its name to the John Lennon Pub and it displays pictures of Lennon, along with a carved yellow submarine. The pub’s specialty is, get this, fish and chips. They also serve “baked smoked knee black beer.” Huh?

One of the many details on houses you might spy in Prague—this home sits alongside the Charles Bridge on the Lesser Town side, and doesn’t it just cry out to be photographed as you wander across the bridge spanning the Vltava River. Well, maybe it doesn’t cry out to everyone, but I swear I heard it call my name. Note the lit candle (is it?) in front of the Madonna (is it?).

Too many details to count, words and signs everywhere here in Wenceslas Square, and who knows what this “sculpture” is meant to depict or honor. Wenceslas Square these days is a vibrant entertainment/shopping area lying in the heart of Prague’s New Town (Nove Mesto in Czech). Of course, “new town” is a bit misleading since the area was originally laid out in 1348 as a horse market. Traditionally, when the Czechs want to blow off steam, they gravitate to Wenceslas Square, which can accommodate maybe 39,999 angry demonstrators. 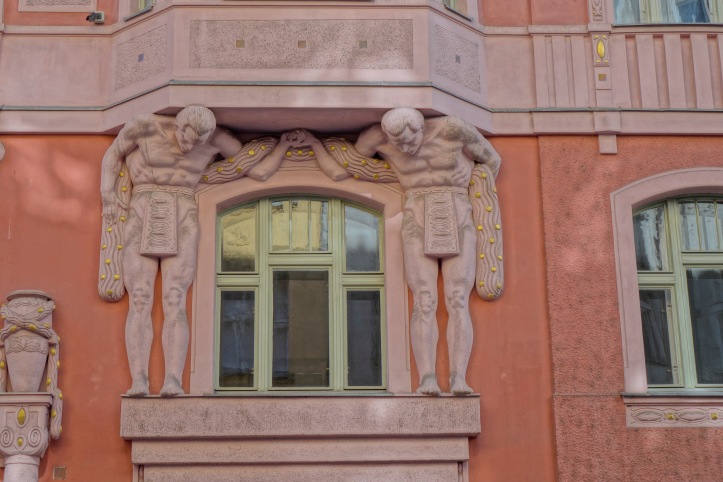 One of the many art deco buildings you find in Prague’s Old Town, this one in the Jewish Quarter just one block over from the Gucci store. And Hugo Boss. And Yves St Laurent. And Mont Blanc. And Dior. And Prada. And…well, you get the idea of what that street looks like. But if you go to the end of the street this building is on (which is the street the apartment I rented sits on) and turn left onto Dusni Street, you can eat lunch at one of the finest little cafés in town, The Little Break, where you step down into a nicely appointed, lower-level dining area or dine outside under umbrellas on the sidewalk. Try the goulash in a bowl made from a loaf of Bavarian-style bread, and eat the bowl, for 149 Czech korunas. Or try the duck baked on honey apples with red cabbage for 349 korunas. Tell the owners, Natalia and Pavljuk, I sent you. You may not get a free dessert, and they may not remember who the hell I may have been (that guy who ate the goulash in a bread bowl!), but at least it offers you the opportunity to name drop.

Ancient cobblestones make interesting designs for your feet to wander across as long as you follow good advice and don’t wear your stilettos. But the stones make poor roads to ride your Segway on, so if you go to Prague, here’s my advice: don’t rent a Segway. It’ll jar your kidney stones loose. Segways may be banned by the time you get there anyway. I think I vote for that. I witnessed a teenage boy on a Segway collide with another kid on one. One boy got up, the other didn’t…for a long while. Cobble stone streets, obviously, are not one of the things you want to fall down hard on. 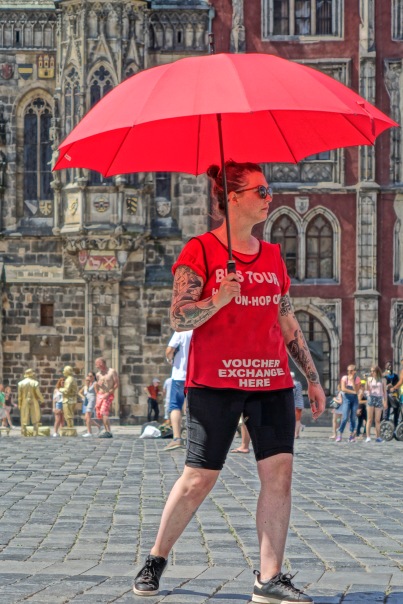 One way to get around and see Prague’s sites, if you don’t rent a Segway or a bicycle (or walk as I did), is to ride one of those big open-air buses. Old Town Square is a place to purchase a ticket. Apparently, this lady can help. 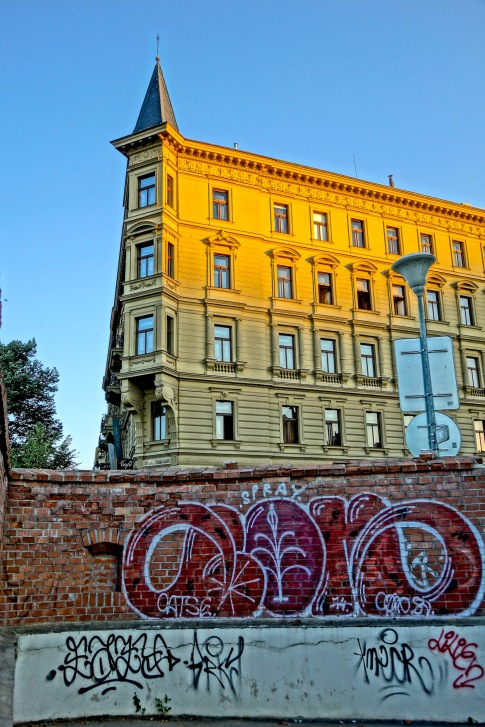 A little bit of old stuff and new stuff just down river from the Frans Kafka Museum, which is not the place where he was born. A bad tour guide will brusquely point to a building in another part of Old Town and say: “That is where Frans Kafka was born” and then quickly whisk you away to the next spot on the agenda. Technically, that’s true, it’s the “spot.” But not in the building that stands there today. The building in which Kafka was born was torn down, the new one was built in its place. A good guide will tell you this kind of stuff. 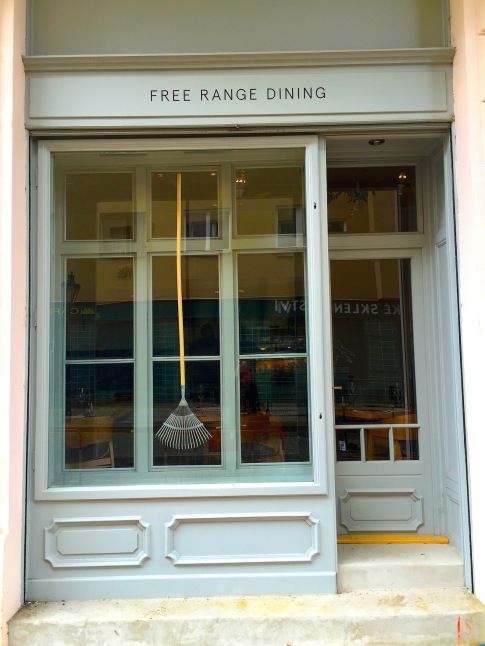 You know, this is the kind of detail that miffs me later on when I look at the photo. Sure, it’s a fun scene, and a fun photo to show the scene. But what miffs me now is that I did not take the time to even poke my head inside to see just what was “Free Range Dining”!! Was it a big salad bar you grazed through, or just ad hype to get you inside? I guess I’m not really interested much in eating. Or dining out. I would like to be cool and say I’m a “foodie,” and I would like to be a connoisseur of wine, but I’m just not: to me, eating is a waste of time, and I just don’t like the taste of wine—red or white or pinkish. Give me a bowl of goulash, a hunk of peasant bread and a Perrier, and I’m good to go. Or better, just give me a pill with all the needed nutrients. I can’t even take a decent photograph of food. 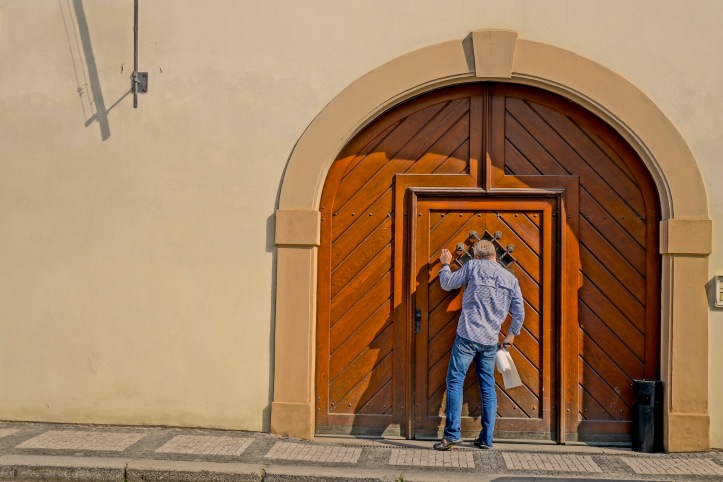 “Martha? Martha, are you in there? I’ve got the Chinese take-out. Martha?” 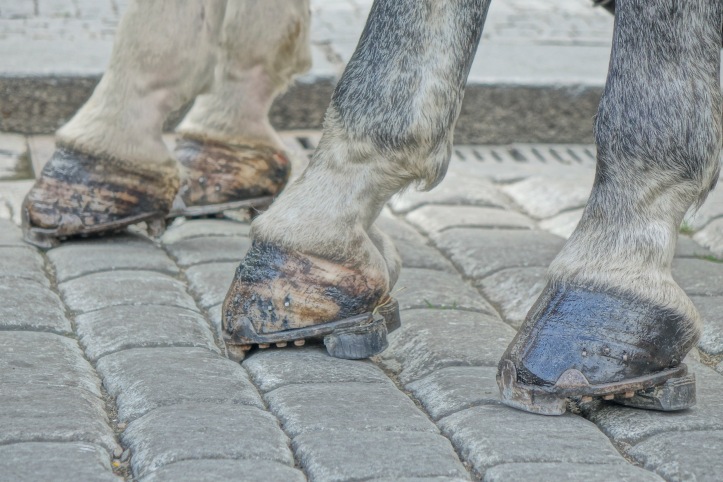 Horses pull old-time carriages around town, so tourists can get the feel of how Prague felt at the turn of the century…sort of. It’s kind of interesting to move at that slow pace, unless, of course, you’re not in a carriage and in your Porsche and happen to get stuck behind one (along with a long line of other cars) on a one-lane road and have to lumber along in first gear until you hit the corner and can pass the carriage. I’m wondering if you might have thought this would finally be a post without poop—because another thing you don’t want to happen while you follow a horse and buggy is for the horse to drop a few nuggets into the street in front of you. It happens. The horses wear these specially-designed shoes that facilitate their not slipping, and soften their step and put less stress on their joints, on the awkward and unstable footing of the cobblestones (where, remember, nobody wants to fall).

ARE YOU A FOODIE? DO YOU DISDAIN PEOPLE WHO DON’T LIKE TO EAT?

HAVE YOU EVER BEEN ON A SEGWAY?

APOLOGIES: I’ve been traveling with very poor and intermittent Internet access. Yesterday, I washed up on the shores of Malta and am now living in a 500-year-old stone house in an atavistic (and non-touristy) village on the island and apparently, have no Internet access. So, it’s been difficult to post, and next to impossible to comment on other blogs. And worse, there is no Starbucks here. Now we understand just why the word “travel” came from the word “travail.”