Capture the Heart & Harmony of a Place in Only 9 Photos

“The cool thing about being famous is traveling. I have always wanted to travel across seas, like to Canada and stuff.” ~ Britney Spears 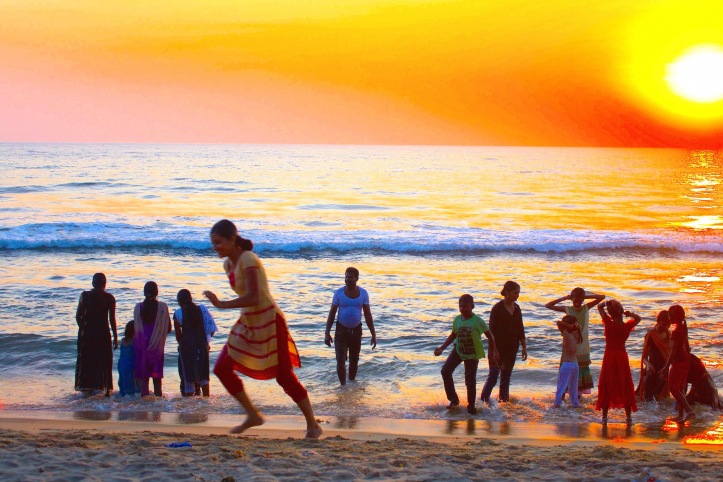 FOR KICKS, LET’S JUST SAY YOU’RE A PROFESSIONAL PHOTOGRAPHER. You are flying home from a photo shoot in—okay, say—Burma where you photographed Angelina Jolie in a  wisp of see-through silk on the deck of a tramp steamer paddle wheeling its way down the Irrawaddy River. We’ll assume you are a little older (or a bit of a rogue) because you prefer to call it by its former, more exotic-sounding name, Burma, rather than its new name Myanmar, which, first of all is harder to say and second, not exotic. Let’s assume your Air India flight lands in Trivandrum, and you have a one-day layover. You have always wanted to visit the oceanside hamlet of Varkala. You hire a taxi to drive you up the Southeast coast of Kerala from the airport.

You have done a little research on Varkala. You know it has become Kerala’s most popular gathering place for the backpacker crowd; it has become the “Goa” of this part of India. There is no Starbucks or KFC, but you can get a damn good cappuccino (which will cost you more than breakfast) and great dinner at a fraction of what you pay at home. You know Varkala sits on a cliff top—with long crescents of golden sand below, surf waves, and dark blue and green waters of the Lakshadweep Sea—on the Southeast Coast of India somewhere between the Laccadive Islands and the Maldives.

Varkala is an ancient town. According to Hindu mythology, the sage Narada told pilgrims to go there to offer their prayers. Varkala is mentioned in a number of ancient Hindu texts, some dating before the first century, and is also mentioned in Ptolemy’s Periplus as an important trading center (circa 100 CE).

Because the roads are bad, and traffic dense and chaotic, it takes longer than expected for you to drive the 25 or so miles and arrive in Varkala: two hours instead of one. The taxi drops you at the helipad on the cliff above Papanasham Beach. Let’s also assume—if only to add a touch of dramatic effect here—that you have only nine shots left in your camera in which to capture the heart of this place. You must build your story, and create a sense of harmony and place in your photo essay, with only nine photographs.

You make a list of the nine basic types of shots (cliches by now to most photographers) that you will take when you try to capture the essence of a place like Varkala, then you go shoot them:

1   A Scene Setter: an “establishing shot” of the place showing an overview of where or what it is, perhaps a panorama, perhaps at sundown at the ocean with maybe some people under umbrellas.

2   An interesting object to look at:

3   An entertaining activity to do:

4   A beguiling eatery or watering hole:

5   A charming place to sleep:

6   A fascinating gizmo to purchase:

The following might have been your photographs before hopping back into that taxi and driving back down to Trivandrum International to continue your journey home:

2   An interesting object to look at:

3   An entertaining activity to do:

4   A beguiling eatery or watering hole:

5   A charming place to sleep:

6   A fascinating gizmo to purchase:

10  Expect the unexpected—you discover you have 10 shots, shoot something you did not expect to find

You can find other entries to the DP Photo Challenge here: Harmony