All great quests begin with a dragon to slay. And of course, a truly noble quest may include a princess in distress, a pilgrimage site, various vagaries of a strange and near-magical land, and then there’s all the unlikely characters—some timid and tilting at windmills, some brave and dueling with devils, and some…sheer villains.

The path is peppered with one ordeal after another—otherwise, we’d call it a five-star vacation sitting waist deep in tepid water at the poolside bar, which is lovely, but not a quest.

At some point on a quest, you may meet a mentor who aids your progress, or maybe a wood nymph or goddess appears offering comfort or grace. There’s a heartbreak or two of some sort along the way, a chapter or two you may regret.  Perhaps your Karma drone falls out of the sky, or a wheel falls off your carry-on. You may find a hint of humor—perhaps your sidekick wanders away chasing rainbows and unicorns in one scene. Just when things seem fine, trolls emerge from under what appears a safe bridge to cross. 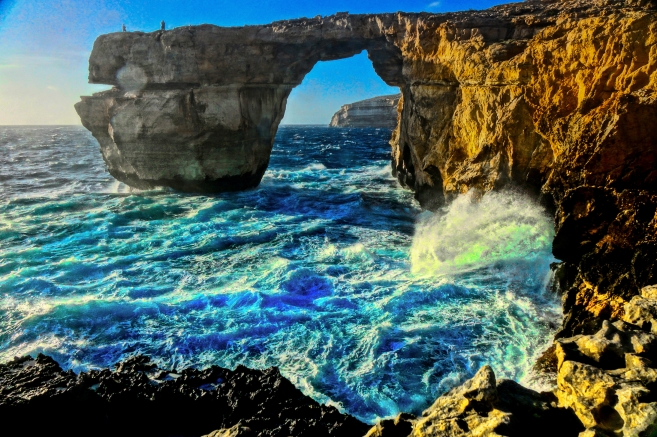 Quests all end pretty much the same way: your underdog’s character changes, a hero emerges and maybe learns to fly solo after learning valuable lessons, then returns to the shire with the magic elixir—or returns with 2TB of photos, a Tumi carry-on, and an upgraded drone.

When you travel the world solo, some days feel like a quest.  Take, for example, my desire to visit the most-stunning site in the Maltese archipelago: the Azure Window on the island of Gozo. 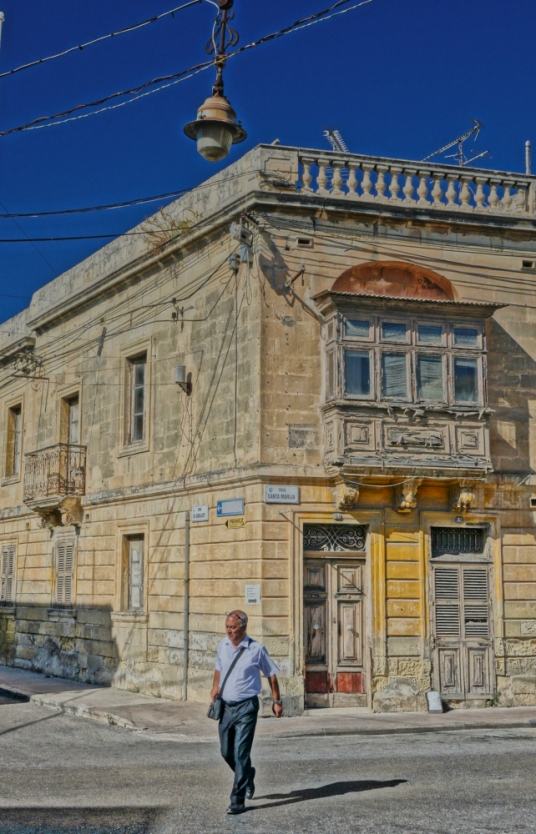 I was holed up in an atavistic five-hundred-year-old, limestone-walled home in the small village of Tarxien on Malta’s main island. I had intended to rent a car for the whole month I’d be on Malta, but never quite got around to it until my last week there. The guidebooks actually say “driving on Malta is fun.” However, I’m the poster child for procrastination, and I also held a fairly good rationalization not to: they drive on the wrong side of the road in Malta, the left.

Besides that, the local bus is remarkably inexpensive and stopped fifty paces from my front door. If you ride west for 20 minutes, the bus drops you at the main bus terminal outside the medieval city gate of Valleta, where you can transfer to anywhere else on the island at no extra charge. If you go east, the bus drops you in front of Costa Coffee overlooking the alluring Marsaxlokk Bay.

And perhaps most importantly, the towns are small, quaint and appealing to walk through; you see and experience significantly more than if you’re behind the wheel, concentrating on the left side of a narrow road or figuring out which way to turn at the next roundabout.

On some quests, it may be difficult to get through your day, as some like to say, without at least one good rationalization.

On this venture to view the Azure Window, the villain appears in the first scene while I’m renting the car. My first impulse here is to begin whinging about this initial bump in the road before I even get on the road, but I’ll “man up” and move on. Let’s just leave it with this word of caution: the villain in our story performs sloppy sleight-of-hand tricks and palms your money like an ace of spades.

But let me offer you this advice du jour: if you travel to Malta and decide to rent a car at the airport, make arrangements well in advance, and choose your agency depending on whether or not you wish your travails to begin at the car rental counter or somewhere else further along your adventure.

Okay, and this: if the car rental company’s name begins with a “G”, read a few online customer reviews and know that everything negative, and each scam, those customers endured—all that is going to happen to you.

Apparently, I need to hone my manning-up-and-moving-on skills.

There is no airport on Gozo, yet, though there is a plan to build one.

One more piece of advice: visit before they do—Gozo is still a rough gem waiting for the final polish of globalization. There are no Starbucks, no Taco Bells, and only one McDonalds.

You’ll drive from where ever you are on the main island of Malta to the far west end and the little burg of Cirkewwa on the rustic Marfa Peninsula. I’m rather in a hurry to reach the ferry early enough to beat the flurry of late-night tourists who arrive later in the morning.  And I’m more than a little uneasy about getting lost, so I don’t bother to stop and take photos. But I do get lost. And I arrive at the ferry terminal a bit later than I hoped.

It was my own fault. I had the Google Maps turn-by-turn directions set up on my phone, which I’d never used before and didn’t quite trust (because I’m from the dinosaur generation that still doesn’t trust techy stuff, just recently purchased my first smart phone, and already have been diagnosed with appophobia), and then I see a road sign that says “Cirkewwa” with an arrow that looks like the right direction, so instead of listening to my phone I follow the sign, figuring there would be more.

Advice du jour: when driving on Malta…listen to your phone. You’ll find yourself meandering through marvelous, picturesque villages with a maze of narrow streets built for horse carts, few road signs, homes of stone, and hundreds of photo ops, but you may need Ariandne’s Thread to find your way out of these small towns. 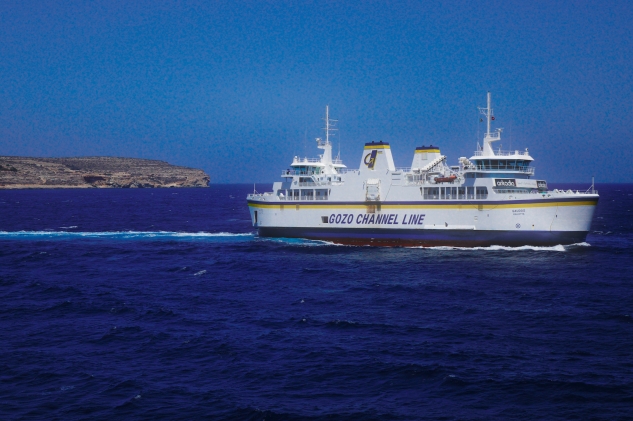 When I finally reach the ferry terminal, I’m a little unnerved at how many cars are already in line, rows of them. I leave the car in line and walk toward the terminal to purchase a ticket. Inside the fairly-new terminal, it feels more like a bloggers convention or night club—modern and nicely appointed décor; a shedload of young travelers brandishing backpacks, tech gear, and music; the din of expectation rising like steam; and a bar to buy drinks and sandwiches. Only thing missing is a disco light. I buy a brownie and Perrier. Obviously, this is a fine place to while away some time while waiting for a ferry.

But I feel antsy to move on and, uncharacteristically, not in the mood to sit with other travelers and talk travels. I begin to wonder if this is merely due to my impatience to get on the road to the Azure Window, or my disappointment at arriving late, or something more insidious, perhaps something like early-onset geezer misanthropy.

When the ferry begins loading, it feels like we’re all sliding inside the cone of a huge funnel waiting to slip through the narrow shaft before sifting into the boat. I’m surprised how efficiently and humanely the queue moves, and more cars board than one would imagine possible. Philip, a Maltesean who rides the ferry daily, informs me that at busy times, you might wait for two or three ferries to come and go before boarding. I board the first ferry.

Advice du jour: arrive early in the morning to evade long queues at the Gozo Ferry Terminal—and try to avoid August altogether when all Europe goes on vacation. The ferries actually run day and night at regular intervals. But I suggest crossing the channel at least one way during daylight hours for the impressive views over the deep blue Mediterranean. To ensure an early start, you might overnight at a nearby hotel, perhaps the Paradise Bay Hotel Resort with its private beach and a dash of local panache, only minutes away.

***Caveat:  This story seems to be running away with itself, and is too long for one post: this is Part I of a (most-likely) three-part series (still unfinished). Sorry.